Change Location
Find an ohDEER in Your Neighborhood

ohDEER is the leader in all-natural deer, mosquito, and tick control.

We were founded in 2007 in Wayland, MA, the community which has always been the location of our headquarters.

Yes, ohDEER has done business in three decades of the 21st century.

ohDEER is in its 14th year in business, and is constantly researching, studying, and developing better ways to keep people and property free from deer, mosquitoes, and ticks.

Today, in this space, we are talking about and focusing on deer and problems they create.

We do this even as we attest that deer are beautiful and elegant in form and function … and cute … and serve as a valuable component in the food chain, providing humans and animals with healthy and high-protein sustenance.

But deer also can be a nuisance and health hazard.  Disease-carrying ticks fasten themselves to deer and consume the blood of the host, and if deer visit your property so too can ticks which may fall off and on to the land around your home or place of business.

Deer can be, as well, a problem in that they munch on and consume the produce in vegetable gardens … and the shrubs, leaves, branches, and flowers of privately-owned and cultivated landscapes.

And male deer, aka bucks, damage trees when in autumn and winter they commit to “rubbing” – the process in which they rub their antlers – which fall off and grow anew every year – against the trunk and bark of trees to remove what is called antler felt, a soft, and blood and hormone-rich,velvet that during spring and summer, feeds and activates growth properties in the antlers which are also fairly soft and pliable throughout that part of the year.

As fall and mating season – the “rut”— approaches, and buck testosterone rises in preparation, antlers harden and the felt, having done its job, dries and begins to shed.

In the exercise of mating, when males joust and compete against each other to win over females, a hard antler surface is more valuable than one encased in felt.

Once a buck commences to rubbing off the antler felt, it usually completes the task in 24 hours.

(A note about velvet deer antler.  This substance has been used for centuries to promote healing and energy and testosterone levels, and slow down aging.  There is a huge and legal global velvet deer antler supplement market.  Yet, while legal, some sports organizations, including the NFL and Major League Baseball, prohibit its use, primarily because velvet deer antler contains the powerful hormone insulin-like growth factor 1 which regulates the level of human growth hormone – commonly called HGH – in the body.  Messing with HGH is serious business.)

Rubbing strengthens neck and shoulder muscles so that the buck can better compete in the fighting.  Accomplished, as well, in marking trees with the rub lines proclaiming residence in an area and, depending on how high up and deeply carved are the marks, suggesting to a male that maybe he wants to try his luck with females in another neighborhood.

Rubbing and the mating game for bucks also involves the deer rubbing his head, under which are scent-producing glands, against the tree and transmitting to the tree his scent.  This action is another form of marking and staking a claim, with the scent drawing females looking to mate, and maybe discouraging male competition. 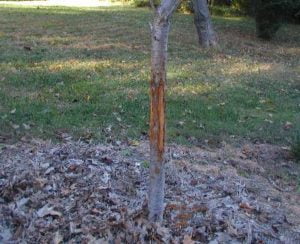 Result of deer rubbing on tree.

When scent rubbing is added to the mix … well … the tree takes a big dose of hurt.   Rubbing can kill a tree.

You don’t, however, have to endure the bad conduct of deer.

ohDEER provides the all-natural and toxic-free solutions that keep deer away from your trees, bushes, shrubs, vegetables, and flowers.

And rest assured, that our solutions, while highly effective, don’t harm deer.

ohDEER wants to note, too, with warm weather upon us, that our all-natural and toxic-free deer control sprays can be applied on your property even as you are having a cookout, and people present will not feel or experience any irritation or unpleasantness.

If you are having a problem with deer, please call or email ohDEER.

We will make your deer problem go away – naturally and safely.